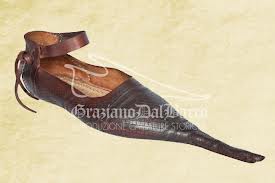 (Vicenza, North East Italy) Around the 15th century, in the courts of Europe, the extension of the tip of the shoe pointed to the social class. There were royal edicts that regulated the length of the shoes, and if you dared to show a pair of footwear with measures not approved for your rank, you could incur a sanction. Graziano Dal Barco, a historical footwear maker of Arzignano, told us this. Thanks to the passion for custom-made shoes that pervaded his family and after having learned from his father the traditional techniques to produce them, Graziano has given vent to his interest in historical footwear and has created a specialized activity aimed at reproducing them with models ranging from those of the Roman times to those of the 18th century. Graziano spent his education studying from tanning techniques to footwear model building, but instead of following the path most taken for granted in the footwear industry or in tanning, he has complemented the work of his father, a historic shoemaker’s workshop in Arzignano, inventing a business of his own.  He does this thanks to a rigorous research in the costume history and evolution, an in-depth iconographic investigation and investing a lot of time and resources in travel and study, creating a network of contacts throughout Europe and giving life to an activity almost unique in its kind.
But who are the fans and customers of Graziano Dal Barco? For example, many lovers of historical re-enactments, but also some theatre and film production companies. His creations are faithful reproductions of what was in use in ancient times, witnessing an evolution that has not been forgotten.
Graziano’s story is also a reward to the tanning tradition of the Vicenza district that has allowed him to learn the techniques of leatherworking and has helped him to have a thorough knowledge of the cowhides and on how they are produced being thus able to judge their quality and their potential to create handmade products that are so special and unique.